So, What is Consent?

Consent is the permission for something to happen; the willingness to engage in a sexual activity.

Consent is a voluntary, enthusiastic, and clear agreement between the participants to engage in specific sexual activity.

Ongoing
You must have permission for each activity at every stage of a sexual encounter. Consent is about communication, and it should happen every time. Giving consent for one activity at a time is not automatic consent for increased or recurring sexual contact.

Note that consent can be withdrawn at any time: A person has a right to change their mind about engaging in, or continuing a sexual activity whenever they choose to. It is important to clearly communicate to your partner that you are no longer comfortable with the activity and wish to stop.

Coherent
Participants in a sexual activity must be capable of granting their consent. If a person is too intoxicated or incapacitated by alcohol or drugs, or is either not awake or fully awake, they are incapable of consenting.

The person must be legally competent to consent to a sexual activity, that is, they must be of, or above the age of consent. Laws on age of consent vary around the world; most European countries have theirs at 16 – 17.

Having sex with a person below the age of consent (when you’re older) is statutory rape, and it attracts criminal charges.

Voluntary
Consent should be given freely and willingly. Repeatedly asking someone to engage in a sexual act until they eventually say yes is coercion. A sexual activity that occurs because of fear, guilt, or pressure is coercion, and it is a form of sexual assault.

If you are initiating or engaging in a sexual activity with someone and the person declines to go further, seems hesitant, or uncomfortable, stop and ask them if they’re comfortable doing that activity or if they want to take a break. Kindly refrain from pushing further.

Consent is required for everyone, including people who are in a committed relationship or married.

How many of you have tried to turn a generator on before? Does it come on without switching it on?

I want you to see consent as the switch of sex, without which any sexual activity can – should — not happen. Silence is not consent. Do not assume that a person wants you to have sex with them — after all, your generator wouldn’t come on just because you assumed its switch was on — ask them if they want to be touched, kissed, or penetrated as the case may be.

Let them know you don’t want to do anything they don’t feel 100% comfortable with, and that you could both stop. 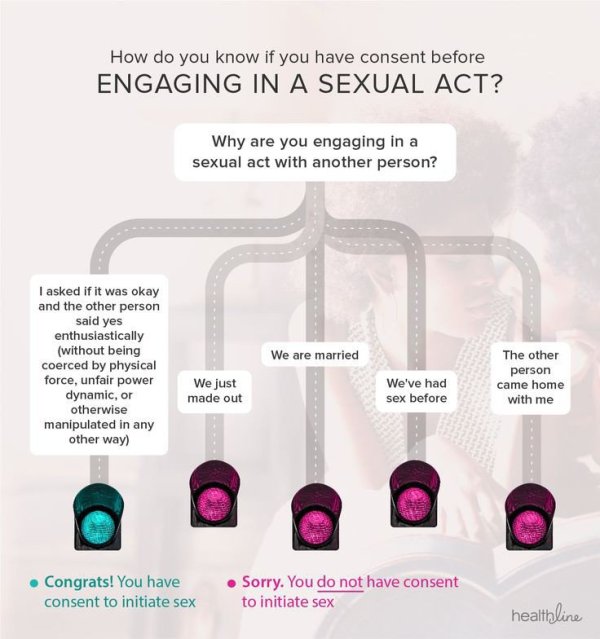 How consent can be sought
In any sexual encounter, the person initiating a sexual activity must ensure that the other person feels comfortable and safe.

Remember that consent must be ongoing. This means even if you’re in the heat of a heavy make out session or foreplay, your partner needs to consent before you take things further.

Asking if they’re comfortable, if they want it, and if they want to keep going is important, so keep communicating and don’t just make assumptions.

Any type of sexual activity without consent, including touching, fondling, kissing, and intercourse, is a form of sexual assault and may be considered a crime.

This brings us to rape and rape culture.

Rape is a type sexual assault.

Rape is a severely underreported crime with surveys showing up to 91.6% of rapes going unreported.
You know one of the major reasons survivors of rape do not report the crime? Rape Culture.

Rape culture includes jokes, commercials, movies, music, laws, words and imagery that make violence against women and sexual coercion seem so normal that people believe rape is inevitable. It includes the use of misogynistic language and objectification of women’s bodies. It is the way in which the constant threat of sexual assault affects women’s daily movements.

Rape culture perpetuates the belief that survivors contributed to their own victimization and are responsible for what happened to them, thereby excusing perpetrators of accountability, and in most cases prevents survivors from getting deserved justice.

A society in which rape culture is prevalent disregards women’s rights and safety. Such society alienates survivors, making it less likely for them to come forward, share their story, or report to law enforcement or academic institutions, for fear of being held responsible for what happened to them. In an environment like this, the society is a rapist’s ally.

How can we end Rape Culture?

...because my thoughts are little flowers

A Chaotic Swirl of Words.

Beyond the shores of Kings to the realm of Gods.

....a virtual extension of my mind.